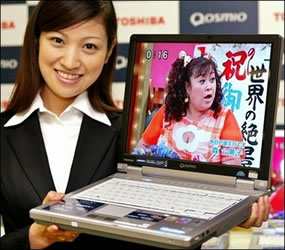 Toshiba Corp. said on Tuesday it would replace about 340,000 laptop computer batteries made by Sony Corp. Worldwide, the latest in a string of Sony battery woes. The batteries, used in Toshiba Dynabook and Dynabook Satellite laptops manufactured between March and May this year, could fail on the road because of problems with storing and transmitting power, Toshiba spokesman Keisuke Ohmori said. Toshiba said that the faulty batteries would not cause fires and that battery failure would occur “only in rare cases,” but that the battery could fail regardless of how carefully it is used.

Last month Dell Inc. and Apple Computer Inc recalled almost 6 million Sony-made notebook PC batteries saying they could produce smoke and catch fire.The massive battery recall has hit Sony just as its painful restructuring drive had appeared to be paying off after a weak patch at the iconic Japanese company that created the Walkman.