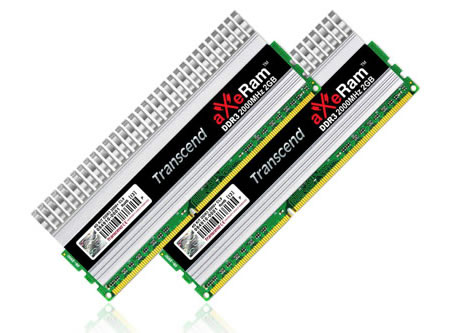 Transcend today launched 4GB aXeRam DDR3-2000 memory kits for use with Intel’s LGA1156 Core i5 and Core i7 platforms. The XMP-ready DDR3 kits are designed to operate at a blazing-fast clock frequency of 2000 MHz with an exceptionally low voltage of just 1.65V. Featuring memory bandwidth up to an incredible 32GB/s, Transcend’s new aXeRam dual-channel memory kit is rated at 2000MHz with timings of 9-9-9-24, allowing performance enthusiasts and gamers to take their Intel Core i5 platform to the next level of memory overclocking performance. The Intel Core i5, based on Intel’s new Nehalem architecture, is the first Intel processor to integrate both a 16-lane PCI Express 2.0 graphics port and a two-channel DDR3 memory controller, enabling all input/output and manageability functions to be handled by the single-chip Intel P55 core-logic.