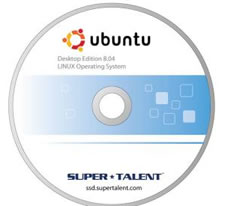 Super Talent announced today that, for a limited time its line of MasterDrive MX SSDs will include a free CD containing the Ubuntu Desktop Edition Linux operating system and the OpenOffice software suite. With the Ubuntu Desktop Edition, you can surf the web, read email, create documents and spreadsheets, edit images and much more. Ubuntu has a fast and easy graphical installer right on the Desktop CD. Installation typically takes less than 25 minutes. OpenOffice contains a user interface and feature set that is similar to other office suites, and includes all the key desktop applications you need, such as word processor, spreadsheet and presentation.

The Ubuntu CD with will be included with every MasterDrive MX shipped from July 1 through September 30, 2008. Built with MLC NAND Flash, the Super Talent MasterDrive MX is completely silent, lightweight, uses less power and has far better resistance to shock and vibration than a hard drive, and supports lightning fast read speeds of up to 120MB/sec.