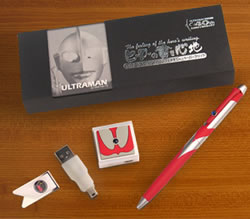 ioPlaza Japan has launched a special set for all the Ultra man fans in Japan. The specially packed set contains a paper clip, writing pen and 256MB USB memory drive. The set is sure to become a collector’s item with the fans. When the memory is connected to a PC via the supplied USB adaptor –blue LED lights up and blinks during data transfer. The high-class ball-point pen is designed as Ultra man body. The paper clip has a motif of 40th anniversary of Ultra man. Ultraman is a fictional superhero featured in tokusatsu, or “special effects” television programs. 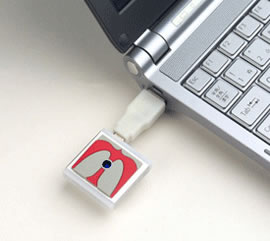 The show was produced by Tsuburaya Productions, and was broadcast on Tokyo Broadcasting System (TBS) from July 17, 1966 to April 9, 1967. The Ultra man show has spawned dozens of imitators as well as numerous sequels and remakes, which continue to be popular even today. The special Ultra man set is available for approximately 6,980 Yen ($60).
Via – ioPlaza (Japanese)