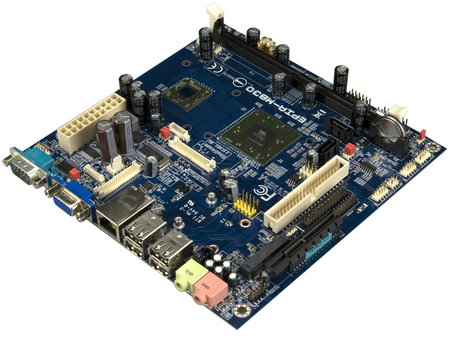 VIA today announced the new VIA EPIA-M830 Mini-ITX board. Designed specifically to meet the needs of next generation kiosk, POI and POS applications. The VIA EPIA-M830 is available in both active and passive cooling configurations. A fanless 1.0GHz VIA Nano E-Series or performance oriented 1.3GHz VIA Nano E-Series processor is joined by the VIA VX800 media system processor providing DirectX9 integrated graphics, crystal clear HD audio and Gigabit networking. The VIA VX800 supports up to 2GB of DDR2 system memory and offers advanced video acceleration for MPEG-2, MPEG-4, WMV9 and VC-1 video formats, plus a VMR capable HD video processor. The VIA EPIA-M830 is designed to take the backbone of devices that offer cashless purchasing and self service infrastructures in supermarkets and gas stations as well as more secure and interactive, multimedia-rich POI, lotto and gaming machines.