Western Digital today introduced the WD Pro Series: My Passport Wireless Pro Wi-Fi mobile storage and My Cloud Pro Series network attached storage (NAS). The WD Pro Series enables seamless transfer of content between devices. My Passport Wireless Pro Wi-Fi mobile storage lets creative professionals and enthusiasts leave the laptop behind when on a shoot. Using the direct Wi-Fi connection, creators can automatically backup files from compatible cameras, as well as save, edit and transfer work seamlessly from up to eight other devices connected to the drive. 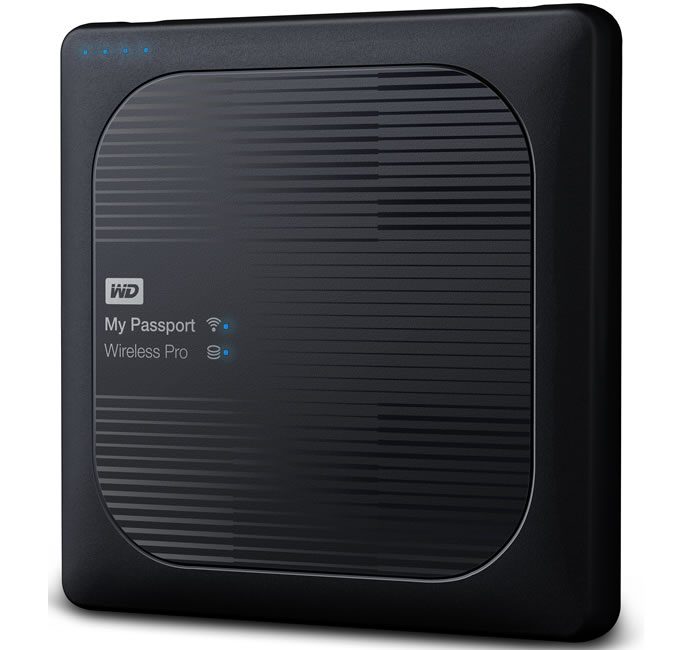 Tethered connections are also available for faster transfers and include a built-in SD card reader as well as a USB 2.0 port. To ensure creative professionals can continue to work while in the field, My Passport Wireless Pro devices include compatibility with Adobe’s Creative Cloud for mobile photo and video editing, as well as compatibility with Plex Media Server. The My Passport Wireless Pro device also features up to 10 hours of battery life and a built-in battery pack that can even be used to charge phones and other devices like digital or video cameras. The My Passport Wireless Pro comes in two capacities: a 2TB model which lists for $229.99, and a 3TB model which lists for $249.99.

Offering up to 32TB of storage, the My Cloud Pro Series NAS are optimized to import from cameras/memory card readers and other USB storage with a simple one touch backup button. Simply connect your cameras and compatible USB storage devices, press a button, and your new files are easily backed up/imported. In addition to giving creative professionals and enthusiasts a reliable place to store their files, this fast, high capacity drive features a hardware accelerated video processor. Its powerful transcoding capabilities mean the My Cloud Pro Series NAS can ingest, edit, store and stream content to and from popular formats, including 4K video. These capabilities compliment a robust, integrated application suite, which includes compatibility with Plex Media Server for storing and optimizing media libraries and compatibility with Adobe’s Creative Cloud for editing and finalizing them.