China has built the world’s fastest supercomputer, the Tianhe-1A, which is capable of 2.57 quadrillion computing operations per second, pulling ahead of the United States in the global supercomputing race. The former No. 1 system, the U.S.-made Cray XT5 Jaguar performs at 1.75 quadrillion per second, 92 percent slower than Tianhe-1A, running Linpack, the benchmark used to officially determine the speed of supercomputers. Tianhe-1A, is estimated to have cost 600 million yuan ($90.4 million) and was developed by the Changsha-based National University of Defense Technology. It employs 14,336 Intel Xeon X5670 CPU and 7,168 NVidia Tesla M2050 GPU, as well as 2,048 home-grown Feiteng 8-core CPUs. 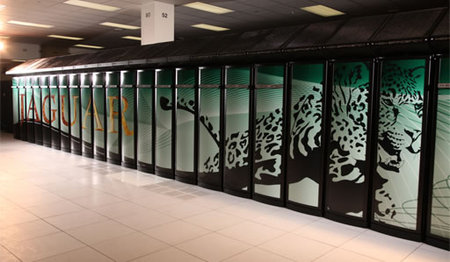 Besides Tianhe-1A, another China-made supercomputer, Nebulae, which is a 1.27 petaflop-per second system, holds the third place on the TOP500 list. Among the world’s most powerful 100, China holds five seats while the United States takes up 42 percent. Out of the 500 list, China-made systems occupy at least 40 slots.