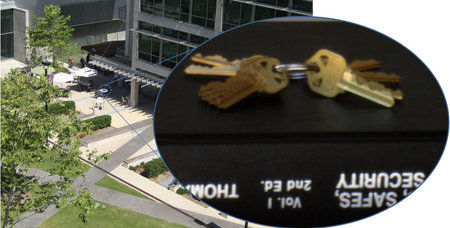 You only need a photograph of the key to duplicate key

UC San Diego computer scientists have built a software program that can perform key duplication without having the key. Instead, the computer scientists only need a photograph of the key. The bumps and valleys on house or office keys represent a numeric code that completely describes how to open a particular lock. If a key doesn’t encode this precise “bitting code,” then it won’t open the door. In one demonstration of the new software system, the computer scientists took pictures of common residential house keys with a cell phone camera, fed the image into their software which then produced the information needed to create identical copies. In another example, they used a five inch telephoto lens to capture images from the roof of a campus building and duplicate keys sitting on a café table about 200 feet away.

The keys used in the most common residential locks in the United States have a series of 5 or 6 cuts, spaced out at regular intervals. The computer scientists created a program in MatLab that can process photos of keys from nearly any angle and measure the depth of each cut. String together the depth of each cut and you have a key’s bitting code, which together with basic information on the brand and type of key you have, is what you need to make a duplicate key. The researchers have not released their code to the public, but they acknowledge that it would not be terribly difficult for someone with basic knowledge of MatLab and computer vision techniques to build a similar system.