Canon And Pro Football Hall Of Fame Announce Grand Prize Winners Of Why Do You Love Football? Photo Contest

For the past six seasons, Canon U.S.A., have asked contestants to answer the question, “Why Do You Love Football?” through photos of youth football. After reviewing over 6,000 entries, the grand prize winners were announced today with Heidi Yowell, 45, of La Habra, Calif., awarded the honor for the Adult Division and Michael Pronzato, 17, of Warrington, Penn., winning for the Teen Division. Each has won a trip for four to attend Super Bowl XLV in North Texas along with a trip for four to the 2011 Pro Football Hall of Fame Enshrinement Celebration this summer, and they will also have their winning photos displayed in the Hall of Fame for a full year. Yowell snapped a photo of her son and husband, entitled Last Game, after the last Pop Warner game of the season. Her son, a third-year linebacker, wore pink socks during the game to help promote breast cancer awareness. 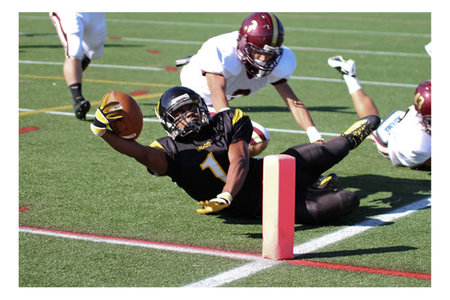 Pronzato captured Give a Full Effort for the Touchdown at the Archbishop Wood vs. Haverford High School football game. He says there is a chance for a great picture every time Desmon Peoples (subject of the photo and Pronzato’s friend) runs the ball. The judging panel included former NFL quarterback Archie Manning along with some of the world’s top sports photographers including Peter Read Miller from Sports Illustrated.