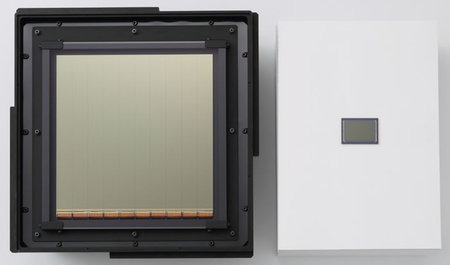 Canon has successfully developed the world’s largest CMOS image sensor, with a chip size measuring 202 x 205 mm. The sensor makes possible the image capture in one one-hundredth the amount of light required by a 35 mm full-frame CMOS sensor, facilitating the shooting of 60 frame-per-second video with a mere 0.3 lux of illumination. Potential applications for the new high-sensitivity CMOS sensor include the video recording of stars in the night sky and nocturnal animal behavior.

At 202 x 205 mm, the newly developed Canon CMOS sensor is among the largest chips that can be produced from a 12-inch (300 mm) wafer, and is approximately 40 times the size of Canon’s largest commercial CMOS sensor.