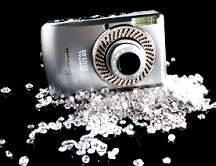 Canon kicked off its IXUS 10 celebrations last night with a star-studded party at the Atlantis Gallery in London’s Brick Lane. The event saw the unveiling of a diamond IXUS worth more than €40,000 as well as three new additions to one of the most iconic camera ranges of all time. A total of ten diamond-encrusted IXUS cameras – one for each year – will be auctioned through eBay with all proceeds going to the Red Cross. The US$50,745/- Super Diamond IXUS is covered with 380 diamonds supplied by Antwerp-based Eddie Elzas, owner of the world’s largest collection of coloured diamonds. Nine ‘his and hers’ diamond IXUS cameras have also been produced with an estimated value of US$4475/-each. 2006 marks the 10th Anniversary of Canon’s ELPH brand. Canon pioneered the stylish camera concept in 1996 with the first ELPH camera, an APS film model designed to take great pictures and fit stylishly into the consumer lifestyle. With each PowerShot Digital ELPH camera that Canon introduces, the company continues to focus on style, fashion and the distinctive look and feel of the ELPH line, a look that many competitors have often imitated, but never duplicated. Canon’s new PowerShot Digital ELPH cameras honor the ELPH heritage of ultimate style while incorporating the latest imaging technologies, such as the DIGIC III image processor. 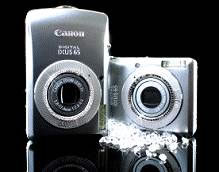 Two key figures behind the IXUS success story – camera designers Yasushi Shiotani and Seiichi Omino – joined international fashion icons, celebrities and more than 600 media representatives to mark the tenth anniversary of the first IXUS. Shiotani’s ‘Box and Circle’ design for the original APS-based IXUS camera in 1996 spawned hundreds of imitations and remains the signature motif of the range. Omino reinterpreted the concept for the digital age with his striking design for the Digital IXUS in 2000.
Via Canon