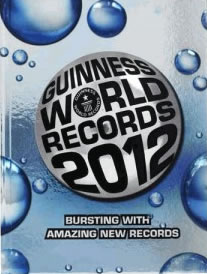 Casio TRYX has been named the World’s Most Adjustable Digital Camera by Guinness World Records. The 12.1 megapixel camera, which appears in the 2012 edition of the legendary reference book, can capture images from virtually any angle and can be adapted to fit a user’s preferred shooting style. The frame rotates 360-degrees and can be adjusted so that the body acts as a tripod, allowing TRYX to stand on its own. Simultaneously, the 3-inch touch-screen LCD screen can be rotated up to 270-degrees so that users can perfect their own self portrait and see themselves in the frame. Casio TRYX’s body can also be adjusted so that users can record full-HD, 1080 video (30fps) using either a left- or right-handed grip.

TRYX is also fully-loaded with a full range of fun and creative functions, such as Slide Panorama, slow-motion video recording and Casio’s revolutionary HDR-Art technology. Casio TRYX appears in the Science and Engineering section of the Guinness World Records 2012 edition under the Consumer Tech category. This digital camera launched in April 2011 retails for approximately $249.99.