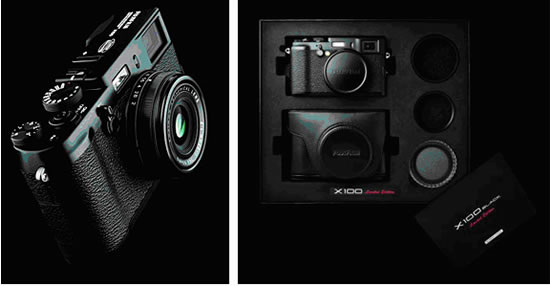 Fujifilm is launching a limited release of 10,000 units of the high-end compact digital camera Fujifilm X100 BLACK Limited Edition worldwide. Fujifilm has been receiving numerous requests for a black version of X100 since its original launch in March last year. The package of X100 BLACK Limited Edition contains the camera unit, a genuine leather ever-ready case, a lens hood, an adapter ring and a protective filter. Each package comes with a message card reading a number as proof that it is one of only 10,000 units produced. The model will end its sales when all 10,000 units are sold out. X100 is a premium compact camera that features the newly-developed Fujinon 23mm (135 equivalent: 35mm) F2 lens and the 12 megapixel APS-C CMOS sensor to deliver premium image.

The camera is also equipped with the world’s first “Hybrid Viewfinder”, which switches between the optical viewfinder (OVF) and electronic viewfinder (EVF). The X100 is a premium compact digital camera that incorporates cutting-edge digital functions, while offering the operability of traditional cameras with the aperture ring at the lens and the exposure compensation dial on the top deck to aid instinctive photography. Since its launch, the X100 has won numerous awards including TIPA, EISA and Camera GP2011 Editors Award.