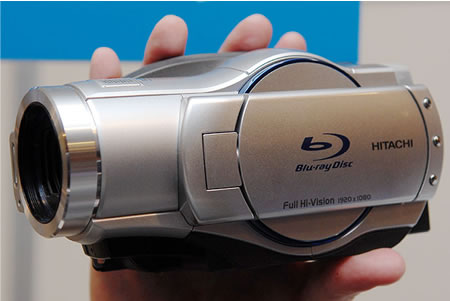 Hitachi Japan will be introducing world’s first Blu-ray, high-definition camcorder models in Japan on August 30.Model DZ-BD70 will record on Blu-ray discs while hybrid model DZ-BD7H in addition to recording to Blu-ray discs, allows users to record high-definition content onto the integrated 30 GB hard disk drive.The single-drive DZ-BD70A comes equipped with a 5.3 MP CMOS sensor, and 10x zoom, and has a graduated ND (neutral density) filter. You can record up to one-hour of 1,920 x 1,080 content to an 8cm single-sided Blu-ray disc (BD-R and BD-RE), or two hours in 1,440 x 1,080 resolution. Standard definition video can also be recorded onto “regular” DVD discs (DVD-R/-RW/-RAM). You can also snap digital still photos at 4.32 MP resolution, which are saved to an SD memory card. 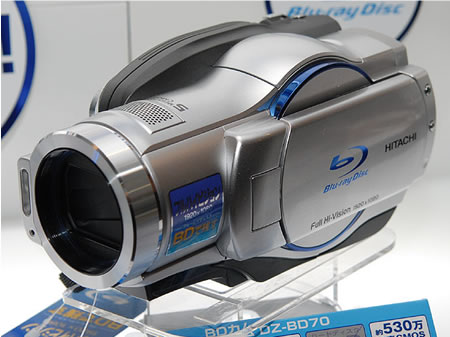 In addition to recording to Blu-ray discs, the hybrid model DZ-BD7HA allows users to record high-definition content onto the integrated 30 GB hard disk drive. This equates to about four hours of 1,920 x 1,080 video in HX mode; or up to eight hours of 1,440 x 1,080 video in HS mode. By simply depressing a button, users can copy recorded video from the HDD to a Blu-ray disc without the use of a computer or external device.

Both camcorders feature a 2.7-inch widescreen LCD; and HDMI port for viewing content on a large-screen HDTV. Also included are component and AV/S; and a USB port each for connection to a PC and other devices capable of video playback. Hitachi’s DZ-BD70 and DZ-BD7H will be available in Japan from August 30th for 160,000 Yen ($1,345) and 190,000 Yen ($1,560) respectively.