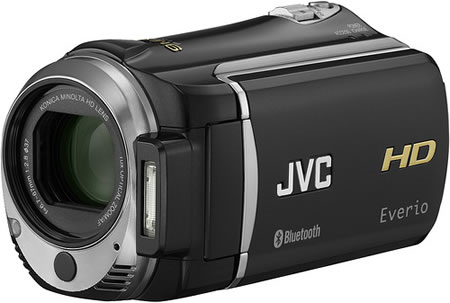 The new JVC Everio GZ-HM550 HD camera’s10.62 megapixel Back-illuminated CMOS sensor enables shooting of 1920 x 1080 Full HD videos and real nine megapixel digital stills to its internal 32GB flash memory. The camera’s Bluetooth technology offers is control of the camera using a smartphone, geo-tagging of videos and stills and use with a compatible Bluetooth headset. With the installation of a supplied application, a Bluetooth-equipped smartphone can be used to control the camera remotely, allowing record, zoom and play operations. Use the camera with a GPS device to record location data of where movie and still files were recorded. The data synchronizes with Google Earth when viewing the file on a PC .The camera can also be used with a Bluetooth-equipped headset to monitor the recorded sound or for voice recording. The JVC GZ-HM500 is equipped with both an LED light and a flash for shooting in dark situations. Advanced Image Stabilizer ensures steady images even while walking.

To make shooting and carrying easier, JVC Everio GZ-HM550 HD camera has a redesigned grip belt that works in two ways — as a conventional handle-style grip when both ends are snapped in place or as a strap when one end of the belt is released. An SD/SDHC card slot provides additional storage. The JVC GZ-HM550 will be available in February for $799.95.