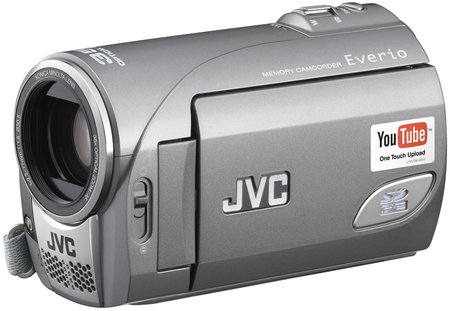 Sharing videos over the Internet is now easier than ever with the launch of a new JVC camcorder GZ-MS100 which provides one-button uploading to YouTube. The new JVC Everio S Series memory camcorder, the GZ-MS100, is designed to make sharing simple for the millions of people who enjoy sharing their videos with the world over the Internet. And unlike many of the other camcorders that target Internet users, JVC’s GZ-MS100 provides an impressive array of full-fledged camcorder features that give it the versatility to do more than shoot short Internet videos.

JVC GZ-MS100 Camcorder looks strikingly similar to the popular Everio G Series camcorders, but is smaller and weighs only 0.60 lbs. including battery, because it records to an SD Card (user provided) instead of a built-in hard disk drive. The ever-increasing capacity and affordability of new SD Cards appearing on the market means that over time Everio S will be able to offer expanded recording time at a lower per minute cost.