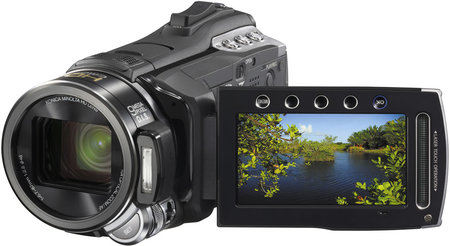 The new JVC HD Everio GZ-HM400, video camera offers the performance, features and handling demanded by video enthusiasts. The HD Everio GZ-HM400, which records to an SD/SDHC card and includes 32GB of internal memory, features a 10.3-megapixel CMOS sensor that delivers nine-megapixel still images and 1080 TV lines of horizontal resolution for Full HD video. High-speed recording of up to 600fps is also possible for slow-motion playback of sports and other fast action. The camera’s features are easily accessible through an intuitive user interface that features analog-like dial adjustment and direct-access buttons. Other noteworthy features of the GZ-HM400 include Face Detection technology that identifies up to 16 faces to accurately adjust the focus and exposure, as well as One Touch Upload to YouTube and the One Touch Export function to easily export videos and stills to an iTunes Library.

Three different high-speed recording modes are available for slow-motion video playback: 600fps, 300fps and 120fps. For still image shooting, up to 60fps 5.3-megapixel stills can be shot in a continuous burst of up to 11 images. It is also possible to shoot 5.3-megapixel stills simultaneously while recording 1920 x 1080 Full HD video. The JVC HD Everio GZ-HM400 is available for approximately $1000/-.