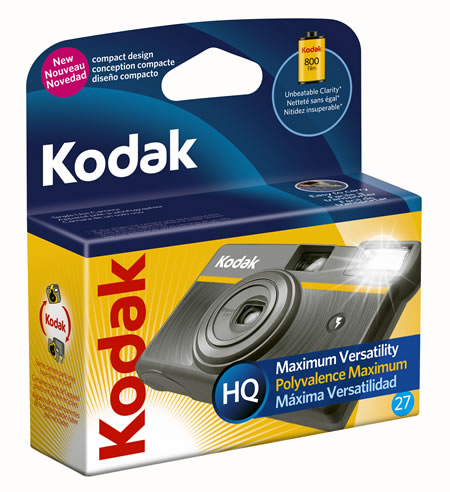 Eastman Kodak Company today unveiled the newly redesigned KODAK HQ Maximum Versatility Single Use Camera that features a silver-colored body with a simple, clean and modern design, which is 20 percent smaller than the camera it replaces.This comes close on the heels of the recent KODAK PROFESSIONAL PORTRA Film launch; and together, they underscore the company’s ongoing commitment to the film category.The new KODAK HQ Maximum Versatility Single Use Camera features an improved design,combined with the KODAK EKTANAR Lens and Kodak’s 800-speed film, to deliver the same high-definition pictures, with unbeatable clarity, of any 800-speed single use camera that consumers have come to expect from HQ.

Approximately 60 percent of Americans own more expensive film or digital cameras but still turn to single use cameras when they want to protect their camera or if that camera isn’t available. The first shipment of the redesigned KODAK HQ single use camera to retailers began February 19, 2007.