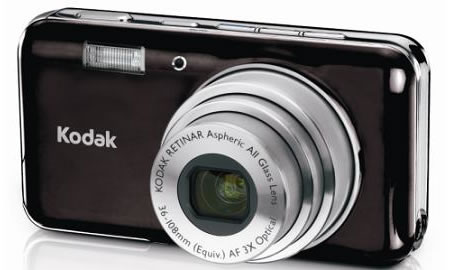 The new KODAK EASYSHARE V1003 digital camera earned a highly-regarded 2007 red dot Award for Product Design. The EASYSHARE V1003 is a stylish, 10-megapixel compact digital camera. The camera shares its sleek, rounded-edge design with the eight-megapixel EASYSHARE V803 camera. Both models feature digital image stabilization, a 2.5-inch LCD screen, and a high ISO 1600 mode for shooting in low-light conditions. Finished in nine shimmering colors, the EASYSHARE V1003 and V803 will be available in April.
The red dot design award ranks among the largest and most prestigious design competitions in the world, and the coveted red dot award – often considered a “quality seal” for the look and feel of a product – is regarded throughout Europe as an international seal of quality for sophisticated and innovative design.