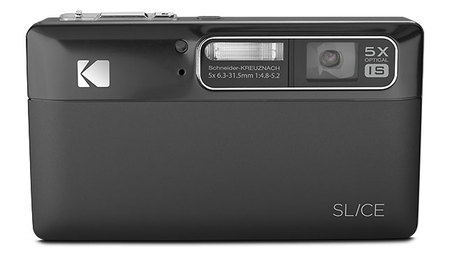 The Kodak Slice Touchscreen Camera lets consumers carry a personal photo album worth sharing and reliving at all times. With a sleek and intuitive 3.5-inch touchscreen, and the Kodak Slice Search Feature, consumers can find the pictures they want from up to 5,000 that can be stored on internal memory. Then, they can easily share those pictures right from the back of the camera. Stunning image quality is assured with a 14MP CCD sensor, 5X Schneider-Kreuznach Lens and built-in optical image stabilization. Other features include 720p/30fps HD video capture.

The touchscreen and Share Button allow consumers to tag pictures directly on the camera for effortless uploading to popular sharing sites including Facebook, Kodak Gallery, Flickr, and YouTube. Pictures can also be tagged to email or to send directly to the new Kodak Pulse Digital Frame. The Kodak Slice Touchscreen Camera will be available in black, nickel and radish for $349.95 beginning in April 2010.