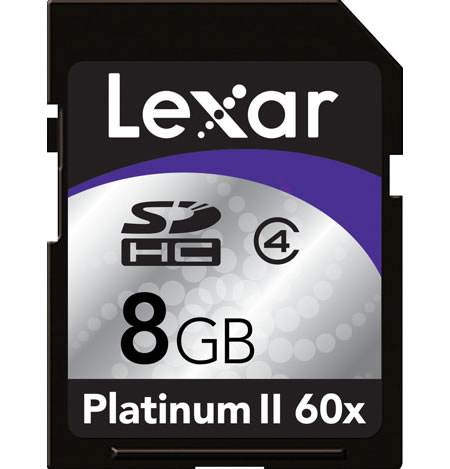 The Lexar 8GBPlatinum II 60x Secure Digital memory card is a high-speed, high-capacity card designed for fast picture-taking, full-motion video, or use with other SDHC-enabled digital devices. The card is speed-rated at 60x, the equivalent of a minimum sustained write speed capability of 9MB per second.

With the 8 GB high-capacity, high-speed performance of the Lexar Platinum II SDHC card, you can take a huge number of photos in quick succession using the “burst mode” feature of your camera, as well as fully leverage the video capabilities of your SDHC-enabled point-and-shoot digital camera. Using a Lexar Platinum II SDHC card means you can always capture that perfect moment.