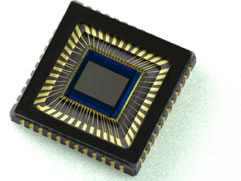 South Korea has developed an image sensor chip that enables digital cameras to capture vibrant images without a flash in dark spaces like theaters or underground traffic tunnels, government officials said Thursday.The state-run Korea Electronics Technology Institute developed the single carrier modulation photo detector (SMPD) chip using nanotechnology, institute officials said.If a digital camera is equipped with the chip, it can take a high-resolution photo or video-recording at 1 lux, as bright as the lighting from a candle 1 meter away in a dark room, the officials said.

About US$10.5 million has been spent to develop the SMPD chip over the past four years, they said. South Korea is expected to earn about 2 trillion won annually from exporting the chip, they said. Japan currently dominates the global image sensor market with a 90 percent share.