Consumers can compose through the bright optical viewfinder or by the vivid 3.0-inch 921,000-dot tilting vari-angle LCD screen. The new tilt screen enables more flexible shooting at creative angles, including down low, overhead or for ease-of-use when mounted on a tripod. The clear color vari-angle LCD display with anti-reflective coating produces high resolution and faithful color reproduction with a wide viewing angle. 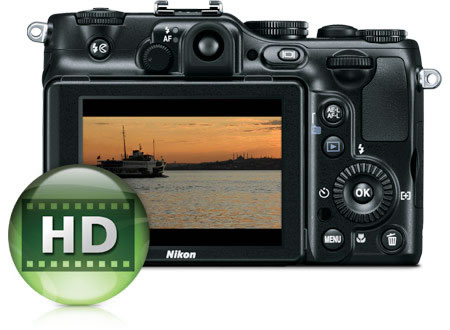 For those shooting movies, the CoolPix P7100 records High Definition (HD) movies at 720p (30 fps) with stereo sound through the built-in microphone. Users can also attach an optional external microphone, such as Nikon’s ME-1 microphone, via the stereo microphone jack. The P7100 also incorporates new movie recording features such as lens zooming during recording, a gain-up function to adjust the optional external microphone and an AE/AF lock available during recording, which is similar to that of a D-SLR camera. Additionally, the camera includes a mini HDMI connector that enables playback on HD televisions and other HDMI-enabled devices.

The design and interface of the CoolPix P7100 has been created with the shooter in mind. It boasts two command dials including a new front mounted sub-command dial, which can be used to access settings and adjustments while holding the grip of the camera. The dials provide advance control and a sense of analog operation when using the camera for an enjoyable photographic experience. This control is implemented to simplify various operations using minimal controls. The COOLPIX P7100 also features a quick menu dial on the top of the camera. Through the quick menu dial, controls like ISO sensitivity, White Balance, advanced bracketing functions, My Menu, Picture Control and image size can be swiftly selected to capture desired results. The CoolPix P7100 is compatible with the latest high speed SDXC memory cards for maximum performance.

The COOLPIX P7100 can be connected to the optional 0.75x Wide-Angle Convertor WC-E75A, which allows for focal lengths as wide as 21mm (35mm format equivalent). P7100 users can also take advantage of Nikon’s Creative Lighting System with the built-in accessory shoe that supports Nikon’s i-TTL flash control, including compatibility with the SB-400, SB-700 and SB-900 speedlights. The Nikon COOLPIX P7100 will be available throughout the United States beginning mid-September 2011 at an estimated selling price* of $499.95.