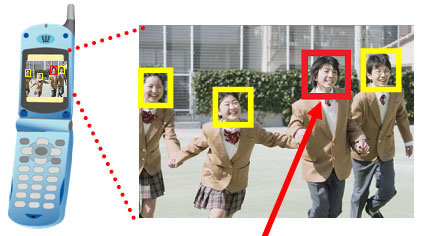 Oki Electric Industry Co., Ltd. announced the development of “Face Sensing Engine (FSE) Ver3.0,” a middleware for embedded systems. OKI adds a new function that can detect several faces from a data of a single photo and can verify specific faces, providing industry-leading processing performance. Photos taken by mobile phones are usually stored based on the date and time the particular photo was taken, which makes it difficult to sort them and search among them. With OKI’s FSE ver.3.0, photos are automatically stored according to who is in the photo, enabling easier access to the photo. When taking a photo using the FSE Ver3.0, it can capture several faces simultaneously. OKI succeeded in detecting within the photo data, areas with similar brightness distribution and structural patterns, thus enabling the detection of a number of faces in a shorter period of time. Once it detects the face, FSE Ver.3.0 verifies the data by comparing it to registered data, which only takes 0.4 seconds, a top-class process performance in the industry. When the photo is taken, an application using the engine automatically stores the photo based on who is in the photo.

Automatic photo sorting enables easier searching for specific photos. Users can set the performance level such as simultaneous detection and the number of people to verify, which can be optimized according to the mobile phone capability. OKI Face Sensing Engine Ver3.0 can be operated in real-time, as in a camera, or can be used afterward to find specific faces from stored photos or videos. This enables users to organize photos and easily find shots from stored photos and videos.OKI plans to exhibit the FSE Ver.3.0 at its OKI Info-telecom Convergence Solution Fair 2006, which will be held from November 9th to 10th at Roppongi Academy Hills 40 in Tokyo, Japan.