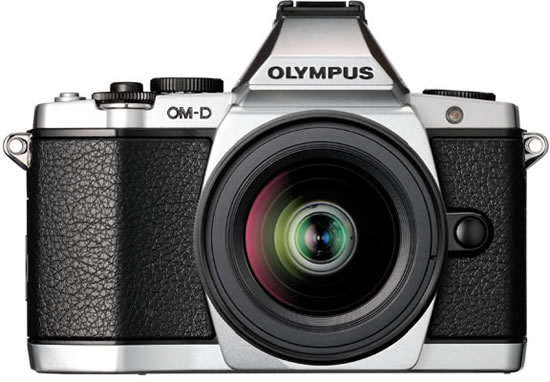 Today Olympus builds upon the 40-year legacy of the OM SLR film camera series and marks the beginning of the new digital imaging era with the launch of the Olympus E-M5, the first of the new Olympus OM-D (OM Digital) Series of Micro Four Thirds products. Designed to meet the needs of advanced photographers, the Olympus E-M5 is packed with a built-in electronic viewfinder, superior image technology, blazing fast speed and total creative control in a classic, rugged body ready for sand, sun, sleet or snow. 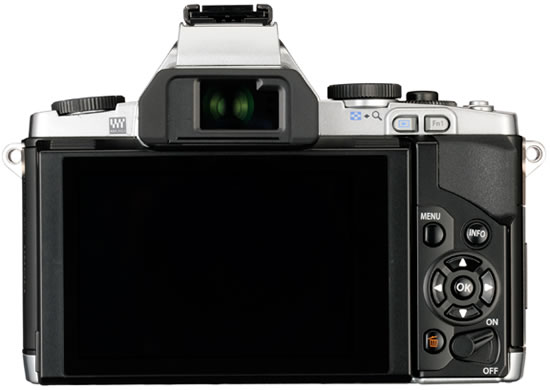 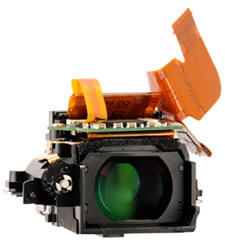 The OLYMPUS E-M5 is the first Olympus interchangeable-lens camera to incorporate a 120-fps refresh rate, High-Definition electronic viewfinder with an eye sensor to seamlessly switch the display between the tilting, 3.0-inch touch screen OLED and the electronic viewfinder for ease-of-use, features a 100-percent field of view, maximum 1.15x magnification and an eye point of 18mm for fatigue-free viewing. Camera setting information, such as shutter speed, is displayed at the bottom of the viewfinder. 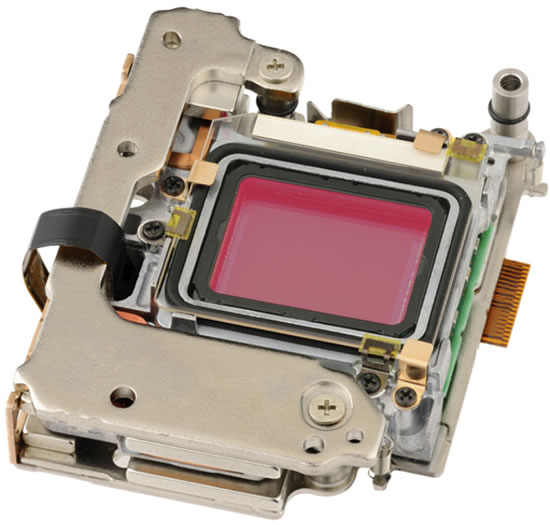 The Olympus E-M5 uses a new 16.1 megapixel High-Speed Live MOS Sensor offering improved performance and exceptional clarity and speed in all aspects of image capture. Olympus’ TruePic VI image-processing engine dramatically improves image quality in low-light environments. The camera’s sensor allows for a maximum ISO of 25,600, and the dynamic range has been expanded for more faithful color reproduction. Users who like to perform their movie post-editing on a PC will particularly appreciate the Full HD 1080i movie recording function, which adopts the MOV format (MPEG-4 AVC/H.264). 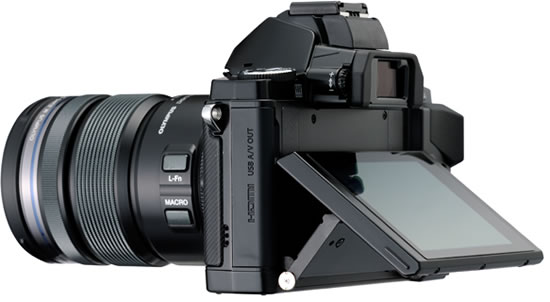 The Olympus E-M5 features a 3.0-inch tilting OLED touch-screen to enable photographers to get up high or down low for any shot. The touch screen interface offers intuitive focus and release of the shutter and review and enlargement of images in playback with the touch of a finger. The new Live Bulb feature updates the Live View image on the OLED screen at pre-set intervals during long exposures and enables the user to preview continually unfolding action such as fireworks or waterfalls and adjust the exposure time accordingly while capturing the image at the desired moment. 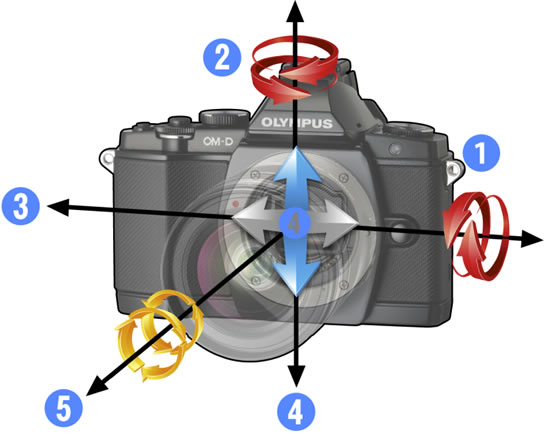 The Olympus E-M5 is distinguished by the world’s first 5-axis image-stabilization mechanism capable of reducing the effects of camera motion and image blur from five directions on stills and video, even including motion blur caused by the photographer walking or running. The Olympus E-M5 IS mechanism is incorporated into the camera body itself so that all lenses mounted on the body can take advantage of this sophisticated technology, whether shooting stills or HD video. The Olympus E-M5 employs the FAST (Frequency Acceleration Sensor Technology) AF system, introduced in the PEN E-P3, but with even greater speed. The 16MP Live MOS chip drives image data off the sensor at a blazing 240 frames-per-second, a 2X speed increase in Continuous Autofocus, with reduced image blackout enabling photographers to track fast action. 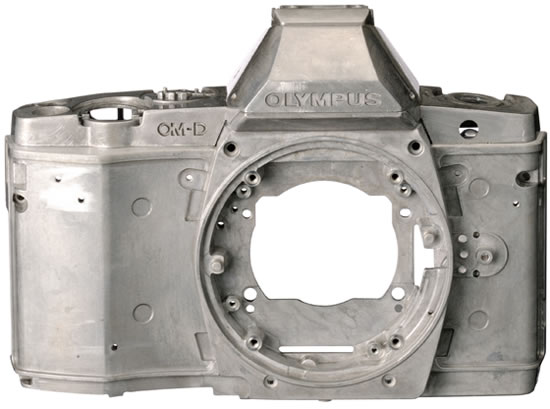 The striking, iconic design of the Olympus E-M5 is more than just looks; its magnesium alloy body is rugged enough to stand up to severe environmental conditions like heavy rain and blowing sand. 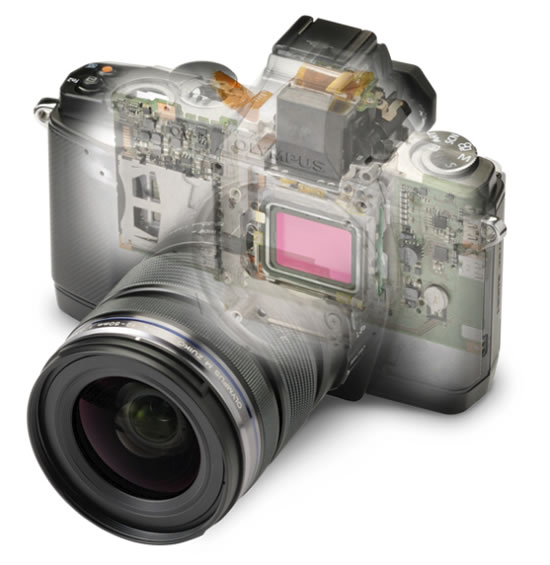 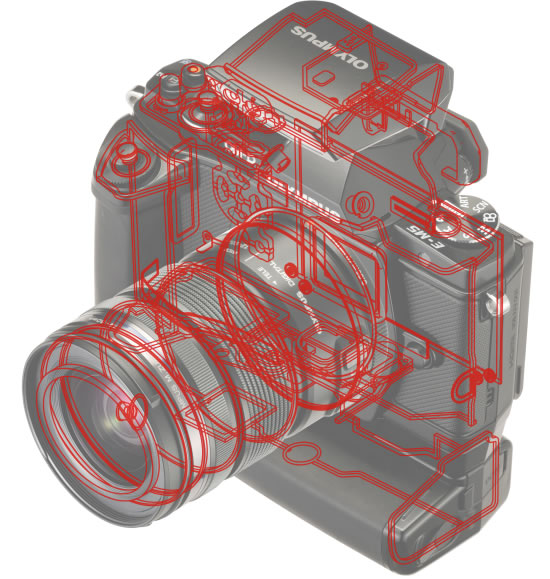 The electronic viewfinder section of the body is also made of magnesium alloy to ensure durability, and the FL-LM2 Electronic Flash that ships with the camera features the same dustproof and splashproof construction. 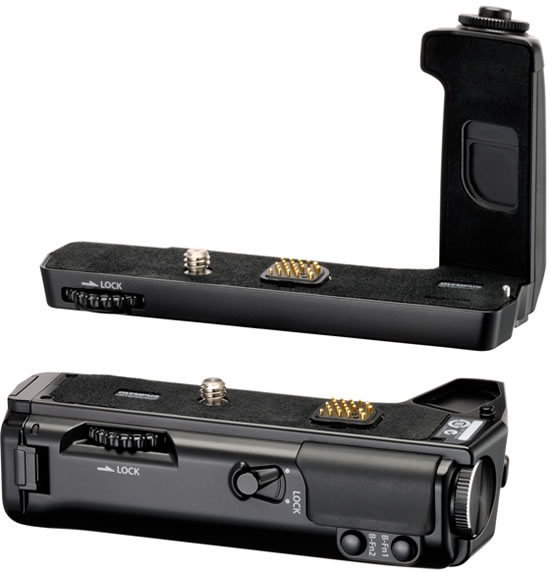 The HLD-6 Power Battery Grip, in the same dust- and splashproof construction as the Olympus E-M5 body, is an adaptable, two-part grip that can be used either as a landscape grip for easier handling or as a portrait grip with an additional shutter release. The portrait grip accommodates an extra lithium-ion battery to supplement the one in the E-M5, thus extending battery life. 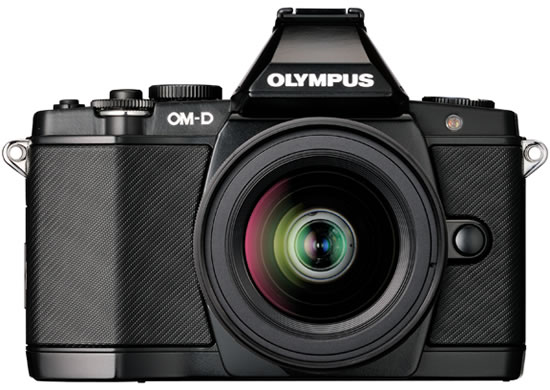 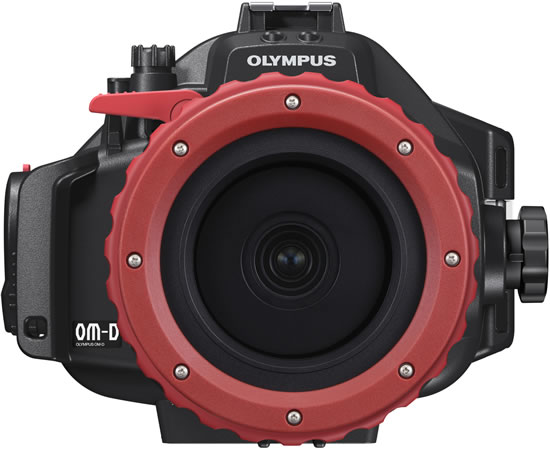