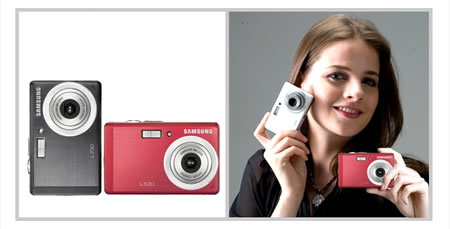 The Samsung L830 has 8.1 mega pixels, and the L730 has 7.2 mega pixels, and they both have a 3x optical zoom. The Samsung L830/L730 is ideally suited for family gatherings such as picnics, school exhibitions or trips, with all its extra functions such as Face Recognition (AF & AE) and Red-eye fix. The Face Recognition (AF & AE) function recognizes individuals and takes the best portrait, while the Red-eye fix takes care of the red-eye phenomenon during and after shooting. With the Samsung exclusive Multi Charge system that has been adopted in the Samsung L830/L730, recharging and data transmission can be done at the same time by connecting a combined recharging and USB cable. The 2.5”Intelligent TFT LCD display in both the cameras automatically adjusts its brightness according to the surrounding levels and offers the optimum visibility.

The Mode Dial of the Samsung L830/L730 enhances ease of use when operating the camera with only one hand. Photo frames, cartoons and stickers add more fun to taking pictures. The Samsung L830/L730 has a powerful movie function using MPEG4, an SVGA level resolution and is equipped with both an editing capability and a variety of image viewing functions.