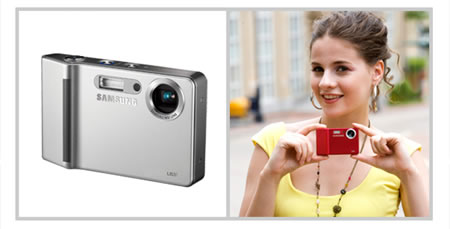 The Samsung L83T is a digital camera for the active young generation who live with their cameras, to capture the bright moments in their daily lives. The Samsung L83T has a wealth of features packed into its slim aluminum body. The L83T offers superior imaging capabilities with 8.2 megapixels, 3x optical zoom and an ISO of 1600. It also features Samsung’s Intelligent Face Recognition Technology, which detects the subject’s face, automatically adjusts auto focus and auto exposure to ensure better composition and image quality in portraits. The AF function instantaneously recognizes the faces of subjects and accurately focuses on them, before allowing the AE function to take over, setting the appropriate exposure to ensure the highest image quality. The Samsung L83T also features a 1cm super macro for taking detailed pictures of a ring or a flower, and a motion capture facility whereby the camera can take 7 pictures a second. By selecting the motion timer, users can take pictures of themselves without a remote control.

A wise shot function is also included, to provide a more exciting picture-taking experience. The Samsung L83T is also equipped with several movie functions, which make it easy to create cartoons, artistic pictures and movies. With 19 megabytes of internal memory the L83T accepts Secure Digital (SD) flash memory cards up to 4 GB. The Samsung L83T will be available from August 2007 for approximately $365.