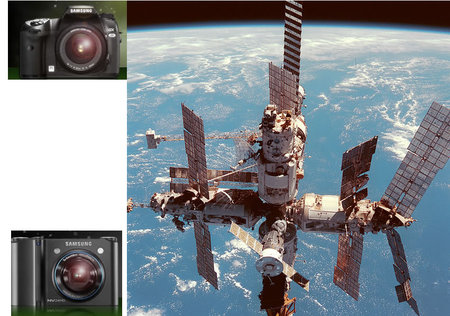 Digital cameras from Samsung Techwin have received final approval from Russia’s Energia and were chosen as “outer space digital cameras” that can be used even in outer space. In a world first, the Samsung NV camera will be used by Energia at the space station as the world’s #1 compact digital camera. The outer space digital cameras from Samsung Techwin, 2 cameras including 1 DSLR camera and 1 NV camera plus batteries, etc., will be flying on the Soyuz spacecraft on April 8th and will delivered to the Korean astronaut Soyeon Lee as well as Russian scientists. The cameras will be used to record daily life in space for 10 days, and the camera’s capabilities will be tested in the outer space environment for about 7 days.

To pass the complicated and rigorous test process, Samsung Techwin’s DSLR camera and NV camera underwent several rounds of document preparation work and a certification process. It underwent an intense shock and vibration test for when the rocket launches, plus a test to check that it is electromagnetically safe and a 3 part safety equipment test for the battery as well as other tests to receive final approval from Russia’s Energia. A Samsung Techwin representative said, “On a historic day when a Korean takes flight into space for the first time, our company is proud that our technology is providing the first Korean digital camera in space.