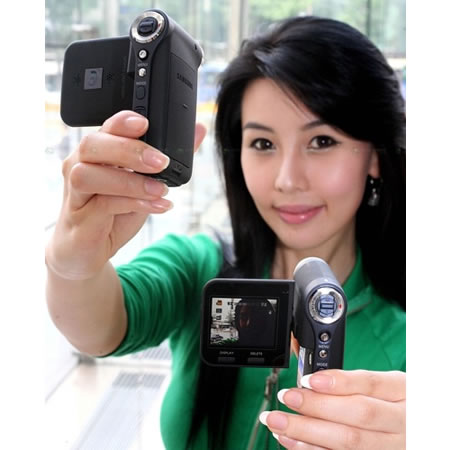 Samsung Electronics has introduced a pocket-sized camcorder VM-X300 that is optimized for recording and editing short Internet video clips. The company hopes the handy VM-X300 model will win the hearts of the young generation who indulge in video blogs and who prefer surfing the Internet to watching TV in their leisure time. Samsung’s VM-X300, which is about the size of a bulky mobile phone is capable of shooting videos of 720 by 480 pixels, which look good enough on small PC screens but not as good on living room TVs. Instead, the boot-up time has been reduced from 12 seconds to two seconds, making it an ideal device for point-and-shoot video bloggers.

According to Samsung the Internet is key to reviving the shrunken video recorder market, where a handful of Japanese makers such as Sony, Panasonic and JVC are surviving. Though those traditional powerhouses have built a strong reputation in high-quality camcorders, newcomers such as Samsung and Sanyo are trying to turn the table with their inexpensive, lightweight and handy cams that are specialized for low-quality Internet video formats.