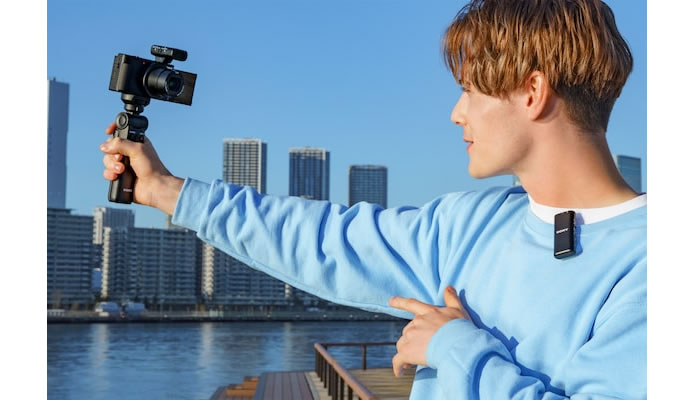 The ECM-W2BT wireless microphone with three sound pick up modes – MIC mode, MIX mode and a new RCVR mode – allows the user to record sound and ambient sound based on their desired preference. MIC mode will only pickup audio from the microphone transmitter so only the subject audio is captured. RCVR mode only picks up sound from the internal microphone at the receiver, so the user can record audio of themselves. MIX mode picks up both transmitter and receiver audio which is useful when audio from both the subject and the user is desired. As the receiver is equipped with 3.5mm audio output, the ECM-W2BT can be used without Multi Interface shoe model cameras.

For challenging recording environments, Sony ECM-W2BT wireless microphone includes an attenuator function. The user can select one of three attenuator levels depending on the sound source volume to record excessively loud sounds at a lower volume or amplify quieter sounds to record louder audio. The ECM-W2BT also includes a windscreen to reduce wind noise, which is especially helpful when recording outdoors. When longer operation is needed, the battery assist function via the power supply from the camera’s Multi Interface shoe enables the user to operate the receiver for up to 9 hours. The Sony ECM-W2BT wireless microphone will be available in April 2021.