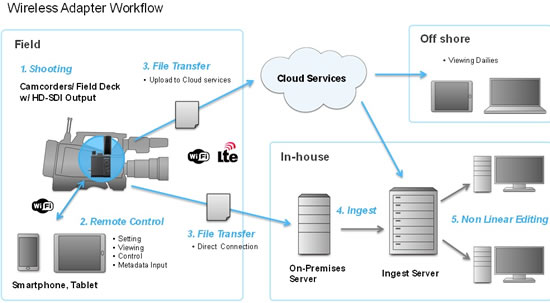 The new Sony wireless adapter, CBK-WA100, is designed to enable easy transmission over a network and efficient remote Wi-Fi operation. The adapter connects directly to a camera and allows proxy files generated on the SD card in the adapter and high-resolution files to be transmitted via 3G/4G/LTE/Wi-Fi to a broadcast station or uploaded to a server-based cloud environment, significantly accelerating the ENG workflow. By drastic evolution of IT technology, the changing nature of modern ENG/EFP requires new capacities; keeping picture quality, higher speed, more ease of use and affordability. Using Wi-Fi transmission, the adapter is also compatible with the Content Browser Mobile application available for tablets or smartphones.

The adapter is compatible with Sony’s full line of XDCAM camcorders and field gear; such as PMW-500/400/300/200/150/160/50 models. It also works with products that have HD-SDI output such as PDW-F800/700/680 and XDCAM EX models. For Sony’s new PMW-400 shoulder-mount camcorder, a special version (model CBK-WA101) is exclusively available enabling one-action attachment/detachment of the adapter. The new wireless adapter, CBK-WA100, is planned to be available in October 2013, while the model CBK-WA101 is planned to be available in November 2013.