Sony today announced the launch of world’s first digital binoculars capable of recording Full HD and 3D video-DEV-3 and DEV-5. Users can select the variable zoom on both models to scan a wide area at low magnification before zooming in seamlessly to pinpoint a subject, such as birds in a field. Turning on the digital zoom at magnification settings over 10x boosts the DEV-5 model’s total magnification range from 0.9x up to 20x digital (image quality is reduced when digital zoom is on and recording 2D video at magnifications higher than 10x), rivalling many high-powered conventional binoculars. The Sony DEV-5 model includes an on-board GPS receiver that automatically geo-tags video clips and photos. Tagged images can be viewed after shooting in online maps (requires compatible software).
The Sony DEV-3 model pulls wildlife, sporting subjects and architectural details closer with a maximum magnification of 10x optical. In 3D mode, the binoculars’ maximum magnification is 5.4x optical. Electronic autofocus allows both binoculars to focus cleanly on subjects less than half an inch away when recording in 2D (minimum of 32 inches when recording in 3D). The binoculars can be connected via HDMI to a Sony BRAVIA HDTV or any HD television with HDMI input for viewing images, 3D videos can be enjoyed on virtually any 3D-compatible TV, including Sony BRAVIA models. There’s also a USB connection for transferring video clips to a PC for storing, editing and sharing. 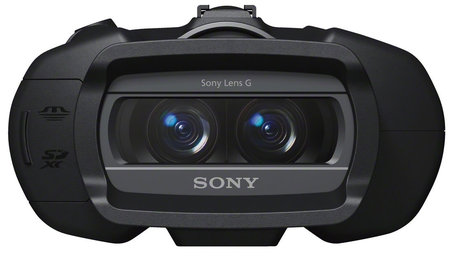 Both binocular models come with a high-capacity rechargeable battery pack (NP-FV70) that allows up to approximately three hours of 2D recording on a single charge. Remaining battery time (minutes) is displayed in the electronic viewfinder. The Sony DEV-3 and DEV-5 models also include a battery charger/adaptor, A/V connecting cable and USB cable for PC connection. In addition, the DEV-5 binoculars are supplied with lens cover, finder cap, large eye cups, a carrying case and neck strap. The new Sony DEV-3 and DEV-5 digital recordable binoculars from Sony will be available in November 2011 for about $1400 and $2000, respectively. 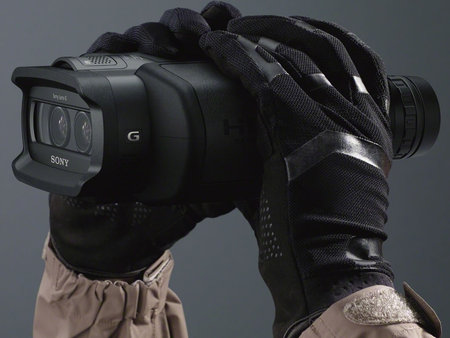