Epson today announced the third generation of its Moverio smart glasses for Augmented Reality. On display at the Mobile World Congress in Barcelona, Spain, the Moverio BT-300 features Epson’s own cutting edge silicon-based OLED (organic light emitting diode) digital display technology, enabling the device to be the lightest see-through binocular smart glasses on the market, and setting the new standard for augmented reality smart eyewear. The Moverio BT-300 is approximately 20% lighter than its predecessor, the BT-200. 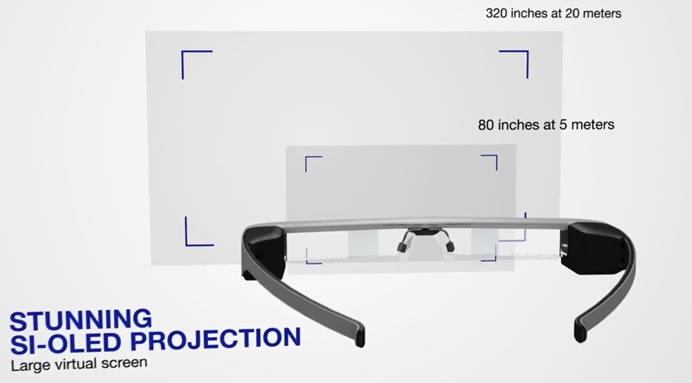 Built with a quad core Intel Atom processor and Android OS 5.1, the BT-300 has significantly increased power to enable it to process 3D heavy content, and maintains up to six hours of battery life. Seeing and making sense of the user’s environment through a 5-mega-pixel front-facing HD camera and other sensors, the smart glasses render content based on what is seen. As on previous models, and cautious of privacy standards, the device features an LED to indicate when the camera is recording.

The Moverio BT-300 continues Epson’s commitment to binocular smart eyewear, real optical see-through overlay, and increased performance, both essential for professional use and opens new consumer applications opportunities. Epson’s Moverio range was first launched in 2011 with the BT-100, supplemented in 2014 with the BT-200, and again in 2015 with the Pro BT-2000. Moverio BT-300 will be available in selected markets from later this year.