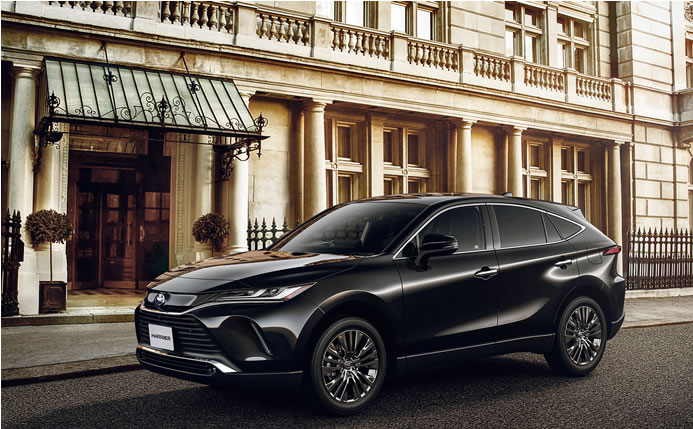 Toyota to Unveil New Model Harrier in Japan in June 2020

Toyota today announced that it plans to release its new model Harrier in around June 2020. Since its debut in 1997, the Harrier has continued to lead the way by pioneering a new Urban SUV genre that is not constrained by traditional categorization. In a clear distinction from other SUVs, the new Toyota Harrier brings together simplicity, elegance, and robustness in a fluent coupe form. Its high-quality interior space provides a sense of security from the first moment inside the cabin. As the vehicle drives off, a feeling of comfort is engendered through responsive driving performance, while the quiet cabin leads naturally to pleasurable conversations with friends. Spending time with the new Harrier will be an enriching experience.

The new Toyota Harrier has a front view that emphasizes its sharp and fearless styling through the continuity of lines flowing from the front upper grill through to the headlamps. The signature lamps emphasize the individuality and technical advancement of the new Harrier, enabling it to be easily distinguished from a distance. Despite a simple structure, the side view offers a dynamically changing body cross section that creates a rich expressiveness while giving a powerful sense of movement.

The combination of a narrowed coupe cabin with sports car-like wheel housings extending from both sides of the body gives a generous ruggedness to the rear view. The light from a thin, sharp line of tail lamps and stop lamps gives it an overwhelming sense of presence. A total of seven muted colors are available, including Precious Black Pearl, to show off the beautifully changing shades.

The center console of new Toyota Harrier presents a wide and imposing impression of a horse’s saddle. It combines with an instrument panel set within the edges of the saddle to present a generous ruggedness with an emphasis on individuality. Extending out from the instrument panel to the door trims on either side, the rich and full dashboard presents a generous breadth, wrapping around the occupants to give a sense of security and comfort. The interior employs low-contrast browns, grays, and blacks. This calming atmosphere gives the interior space a feeling that is both chic and mature.

The interior employs tactile synthetic leather to create the image of a natural-looking silhouette wrapped in thick leather, and bentwood-inspired  wood tones and piping throughout, presenting a casual air of quality. A panorama roof, used for the first time by Toyota, is equipped with electric shades and electro-chromatic windows. Dimming the windows fosters a feeling of quality as soft light penetrates the cabin.

The new Harrier comes with Toyota Safety Sense, which employs a pre-collision safety system that detects pedestrians during the day and at night, as well as cyclists during the day. It is fully equipped with safety equipment for safety and peace of mind, such as Intelligent Clearance Sonar with Parking Support Brakes (Stationary Objects) that helps reduce and/or mitigate damage from collisions during low-speed driving in parking lots, etc. The Digital Inner Mirror, used for the first time by Toyota, enables recording of images to the front and rear of the vehicle while driving.