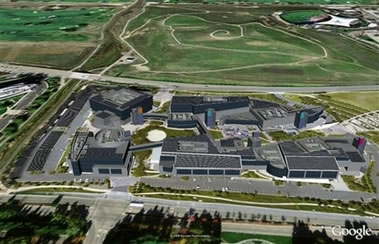 The Internet search leader Google Inc. is converting its renowned headquarters nicknamed the ‘Googleplex’ to run partly on solar power, hoping to set an example for corporate America. Google Inc announced this during a solar energy conference in Silicon Valley on Monday. Google believes the sun eventually can deliver as much as 30 percent of the power at its 1-million-square-foot campus in Mountain View — a suburb about 35 miles south of San Francisco. The ambitious project will require installing more than 9,200 solar panels on a high-tech Googleplex. After leasing the offices for several years, Google bought the campus for $319 million earlier this year. Once they’re in place next spring, the solar panels are expected to produce about 1.6 megawatts of electricity, or enough power to supply about 1,000 homes. The job is being handled by Pasadena-based EI Solutions, part of a high-tech incubator run by entrepreneur Bill Gross, whose idea to link ads to search engine requests during the 1990 inspired the business model that generates most of Google’s profits.

Energy costs are a major concern at Google, which already consumes a tremendous amount of power to run the computer farms that keep its search engine humming. Google wouldn’t disclose the project’s cost, but it won’t strain a company with nearly $10 billion in cash.
Via Reuters