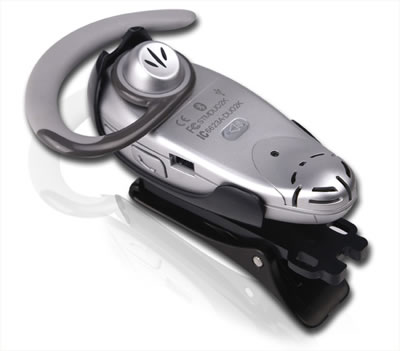 The Mvox Duo from Mvox Technologies Inc is an all-in-one, advanced Wearable Smart Communicator with one-touch voice dialing. The Mvox Duo can be used as a Bluetooth headset, a portable hands free car kit, a mobile conference phone, a VoIP speakerphone and more. It is so versatile, so smart, so comfortable to wear, and so easy to use, that you’ll wear and use it every single day. The Duo fits comfortably over the ear for private conversations and can instantly convert into a high-performance speakerphone for on-the-spot conference calls. The powerful integrated speakerphone outperforms even the best loudspeakers built into most cell phones. The Duo can also connect to a PC via USB or Bluetooth as a speakerphone or headset for VoIP applications, including AOL, Avaya, Skype, Yahoo, Gizmo Project, and Google Gtalk.Best of all, the Duo cuts device clutter, reduces the complexity of having to joggle between four different devices, and frees up your hands and eyes for more productive things. Not to mention the superior sound quality—you have to hear it to believe it.

Other features include-continuous talk time of 7 hours in headset mode, 3 hours in speakerphone mode and Bluetooth operating range of up to 30ft/10m. The Mvox Duo also has 8-megabytes of built-in memory to store contacts, so users can retain the information even if they switch to another Bluetooth cell phone.The Mvox Duo measures 7.6 x 2.8 x 3.0 cm, weighs 25.5 grams with battery and is available from November for $199.99.
Via mvox