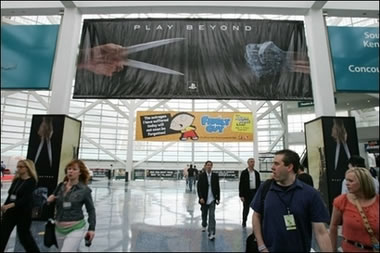 She is armed with a “chemoblaster”, looks like Lara Croft and is the heroine of a new video game designed to help kids suffering from cancer cope with the disease. Roxxi, as she is called, is the main character in “Re-Mission”, a game created by California-based HopeLab as part of a series of so-called “serious games” featured at the Games for Health conference taking place in Baltimore.”Re-Mission’s” intrepid nanobot is a challenging 3-D “shooter” that takes the player on a journey through the bodies of young patients with different kinds of cancer and blasts away at the cancer cells. The game, which came out last spring and took six years to design at a cost of 2.5 million dollars, is distributed FREE of charge to cancer patients. A clinical study involving 400 patients undergoing cancer treatment in Britain, Canada, France, Spain and the United States showed that the game helped young players cope with the disease. The secret to interactive video games designed to improve young people’s health behaviours is that patients “identify with the character, are part of the story where you have a life threat but you can do something about it,” said Debra Liebermann, a pioneer in the sector who helped create “Click Health”, whose hero is an asthmatic dinosaur.

Bruce Jarrel, deputy dean at the University of Maryland’s school of medicine, said the health sector must realize that this new generation of “serious” video games can not only be used for entertainment but also to treat patients. At BreakAway, a company that designs commercial games, notably one war game called “Austerlitz”, officials are preparing to launch “Free Dive” and “Turbo Turtle”, two games that take place underwater and are designed to help patients deal with pain.” One is a totally explorative game design with a virtual helmet for a more immersive experience; the other is more of an action game.
Via Yahoo News