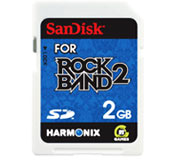 Photographers can showcase their photos by filling the card with hundreds of images and then posting a slideshow on the Wii’s photography channel. The SanDisk 2GB Rock Band 2 SD gaming card is expected to be available for U.S. retailers this spring, and carries a manufacturer’s suggested retail price of $12.99.