Asahi Glass (AGC) last week unveiled the official glass roof for player benches for the 2014 FIFA World Cup Brazil. The glass roof, made from chemically strengthened glass, provides unparalleled visibility, durability and damage resistance, and is an evolution from the model provided last year by AGC to the FIFA Confederations Cup Brazil 2013. The player benches, composed entirely of AGC-made materials such as fluoropolymer-coated frames made with fiber reinforced plastic, will be used at all matches of the world’s biggest sporting event taking place between June 12 and July 13. 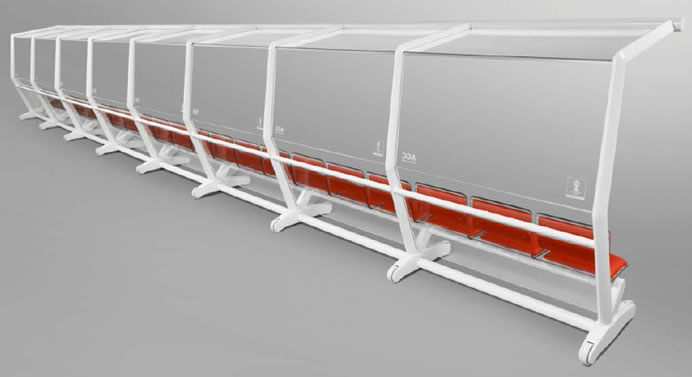 One of the key attributes of the glass roof for player benches for the 2014 FIFA World Cup Brazil is clear visibility. The rear portion of the bench is applied with anti-reflective coating, making its reflective properties 13 times lower than conventional glass to ensure the best-possible visual experience for football fans. Protection for players and staff on the bench is provided by a double layer of chemically strengthened Dragontrail X, considered the world’s strongest cover glass for electronic devices. Dragontrail X is characterized by low center tension and the world’s highest compression stress. Dragontrail X is 30% stronger that conventional Dragontrail products, and up to eight times stronger than soda lime glass.