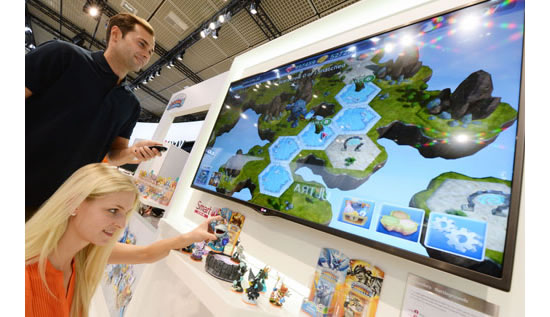 LG Electronics (LG) is bringing popular family-friendly video games Skylanders Battlegrounds and Where’s My Mickey? to its CINEMA 3D Smart TV platform. Demonstrated for the first time at IFA 2013, the fun, family-friendly titles can be played using the intuitive LG Magic Remote. These games will be made available this holiday season in the LG Smart TV Game World app store. Specially adapted and optimized for LG CINEMA 3D Smart TVs, Skylanders Battlegrounds will enable fans of the franchise to play with any character from the entire collection of Skylanders figures. The motion control capabilities of LG’s Magic Remote will help to transport the player into the beautifully rendered battlegrounds of the unique world of Skylands.

Where’s My Mickey? is a spin-off of Disney’s popular physics-based game, Where’s My Water?, and features one of the world’s most iconic animated characters, Mickey Mouse. Players guide Mickey through a variety of entertaining story-based episodes, complete with appearances by other loveable Disney favorites, including Goofy. The third installment in the series, Where’s My Perry?, will also debut on LG CINEMA 3D Smart TV along with Where’s My Mickey?.