Mitsubishi Electric has completed installation of three Diamond Vision screens, one large unit each above the right- and left-field stands and one infield scoreboard, at the Sapporo Dome baseball and soccer stadium in Sapporo, Japan. The screens with exclusive black plastic-molded LEDs are 2.9 times larger, boast five times the resolution and offer 1.5 times the contrast of the replaced screens. They will be unveiled during the pre-season opening game between the Hokkaido Nihon Ham Fighters and Yomiuri Giants on March 3. The screens, featuring a pixel size of 4,000 (w) x 1,080 (h), offer the highest resolution among all 12 stadiums in Japanese professional baseball. 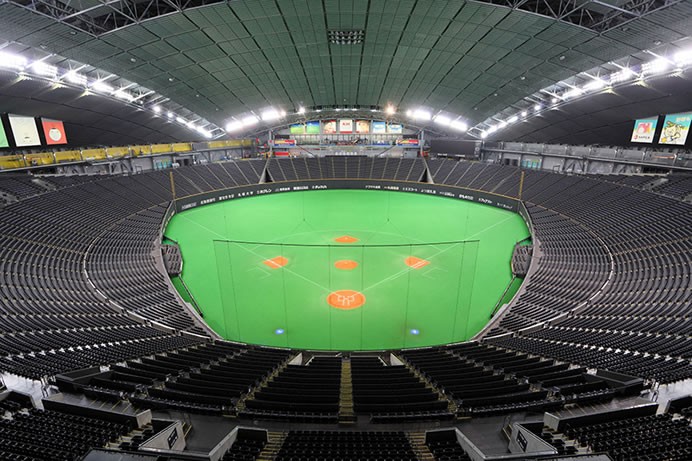 The two large screens each measure 8.64 m by 32.0 m, about 1.6 times larger than the former screen in right field. The infield scoreboard is 3.84 m by 13.12 m, about 1.5 times larger than its predecessor. Enhanced visibility is assured by LEDs that feature an 8 mm pixel pitch and wide viewing angle for reduced color variance. This is the first time in the world to install Mitsubishi Electric’s proprietary black-packaged LEDs in screens at a baseball or soccer stadium. The advanced LEDs, in addition to helping to prevent light reflection, can reduce luminescence in darker lighting and increase luminescence in brighter lighting for improved visibility.