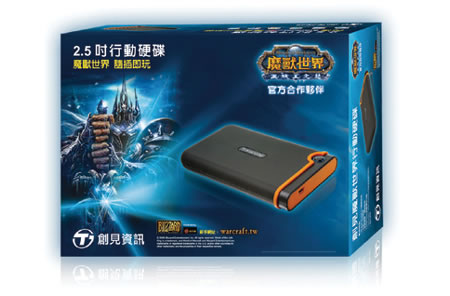 Transcend has joined forces with Game Fast to introduce a special World of Warcraft version of its best-selling 2.5” portable hard drive, preloaded with the complete second expansion set of the game, Wrath of the Lich King. This unique hard drive not only allows gamers to automatically load the game simply by plugging in the drive, but also gives them a convenient way to backup and transport their game saves and settings. The limited edition World of Warcraft package includes Transcend’s lightweight shock-proof SJ25M 2.5” portable hard drive, which has recently earned Japan’s Good Design award for its excellent rugged design and features. To protect against data loss or damage from accidental slips or falls, the SJ25M is equipped with advanced two-stage anti-shock technology, literally making it one of the safest places to keep your data.

World of Warcraft, often referred to as WoW, is a massively multiplayer online role-playing game (MMORPG). With more than 11 million subscribers, World of Warcraft is currently the world’s largest MMORPG in those terms, and holds the Guinness World Record for the most popular MMORPG.The World of Warcraft portable hard drive bundle is now available in 160GB, 250GB, 320GB and 500GB capacities.