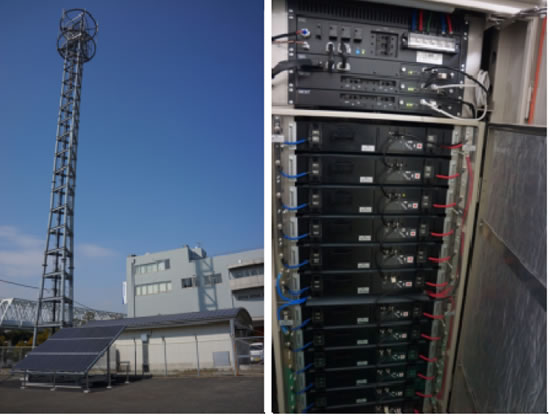 NTT DoCoMo announced today that from April, it will begin field testing three conventional mobile-network base stations in Japan that have been installed with solar panels, high-capacity rechargeable batteries and green power controllers. DoCoMo which is developing disaster-proof, environmentally friendly base stations following the Great East Japan Earthquake tested the equipment at its R&D Center from March 2012 to February 2013. The equipment will now be used to establish 10 green base stations in the Kanto-Koshinetsu region of Japan by late summer, including the first three in Tokyo, Kanagawa and Yamanashi prefectures.

DOCOMO’s green base stations use solar panels to generate and store solar power during the daytime. If commercial power supply is cut off during a disaster, the station can rely solely on this power to run communication equipment during the day and use high-capacity, rechargeable batteries to store 14-16 hours’ worth of power when solar power is not available. The solar panels to be used in the field test generate up to 4.19 kW, whereas the maximum power consumption of a base station is 2.0 kW. To cut down on electricity costs, the batteries can be charged with electricity purchased at nighttime, when costs are relatively low.