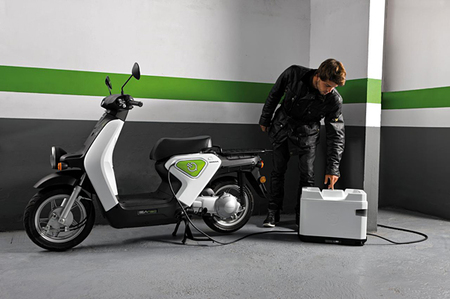 The EV-neo has a range of 34km at 30km/h on level ground. The regular charger takes the battery from zero charge to a full charge in approximately 3.5 hours and is a highly portable unit that fits neatly in the cargo space beneath the seat of the EV-neo. The rapid charger fully charges the EV-neo in approximately 30 minutes.

The EV-neo is also being used in Honda Electric Vehicle Testing Programs in Kumamoto and Saitama prefectures. These testing programmes which include motorcycles, automobile and power equipment products based on electromotive technologies will help to test future forms of personal mobility and their potential in CO2 reduction. In the Kumamoto Program, EV-neo scooters are rented to residents and tourists to provide feedback on their use and benefits and in Saitama they are leased to delivery companies. Lease sales of the EV-neo started in Japan in April 2011 with Honda expecting to sell approximately 1,000 units in the first year. The base price is 454,650 ($5635) Japanese yen.