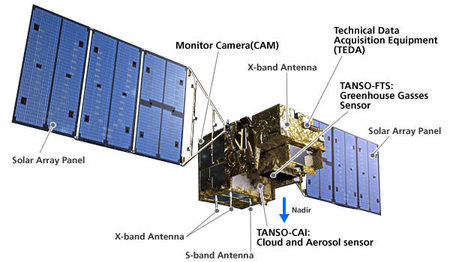 Japan has launched a satellite that will be used to observe the concentration distribution of greenhouse gases from space. The launch of the Ibuki satellite (also known by GOSAT – Greenhouse Gases Observing Satellite) took place on January 23 at 03:54 UTC from the LP1 launch platform of the Yoshinubo launch complex on Tanegashima. Ikubi has a approximate mass of 1750 kg. Is equipped with two solar panels that generate 3.8 kW. The satellite will operate for 5 years on a sun-synchronous sub-recurrent orbit with a inclination of 98 deg. The launch vehicle used was the 202 version of the H-2A rocket equipped with two solid rocket boosters and with the 4S fairing design (4 meters in diameter). Mitsubishi Heavy Industries, Ltd. was in charge of the launch service of the H-IIA.