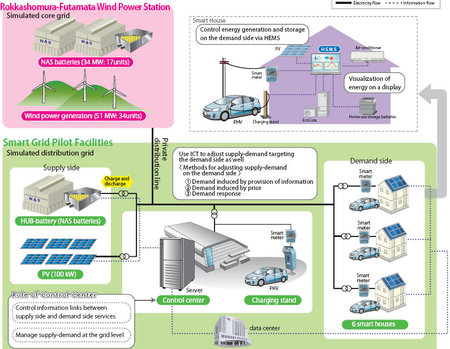 JWD,Toyota, Panasonic Electric and Hitachi announced the start of a smart grid demonstration project on September 16, 2010 in Rokkasho Village, Aomori Prefecture, Japan.The project aims to verify technologies that allow for the efficient use of energy toward the achievement of a low-carbon society. The project will use only renewable energy sources, such as the world’s first wind power stations with dedicated large-capacity batteries and photovoltaic power-generation systems.

JWD, Toyota, Panasonic Electric and Hitachi have built an isolated grid—an electricity network independent from the main grid–in Rokkasho Village, which has favorable conditions for wind power generation and has Japan’s largest wind power generation capacity. The companies will work jointly to develop and demonstrate technologies for optimizing supply and demand effectively.