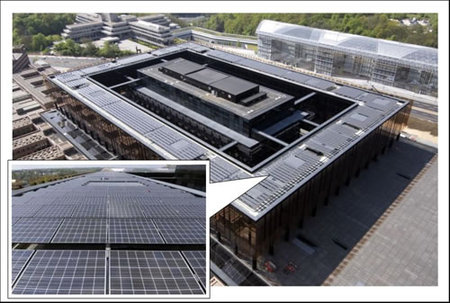 The European Court of Justice in Luxembourg has installed Kyocera solar modules on its new building. As one of the leading manufacturers of photovoltaic systems for more than three decades, Kyocera produces its solar modules without procuring any semi-finished components in its fully integrated production process, thus ensuring quality at every stage of manufacturing. The roof of the new building will be lined with 2,262 KC175GH-2P modules with a total capacity of 400 kWp, and the system is expected to generate an estimated 360,000 kWh annually. By using this environmentally-friendly energy source the court facilities will be contributing to the reduction of CO2 emissions. The installation of the system was completed in December 2008.

The result of Kyocera’s years of experience and fully integrated production process is superior quality and long product life. Kyocera has also started construction of a new production facility for solar cells in Shiga Prefecture, Japan, which will contribute to achieving plans to increase the cell production output from the current 300 Megawatts per year to 650 Megawatts per year by 2012.