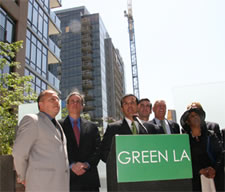 Los Angeles mayor Antonio Villaraigosa unveiled an ambitious plan for installing solar panels on residents’ rooftops to meet 10 percent of the city’s energy needs by the year 2020.The energy plan, Solar LA, is expected to cost each Los Angeles resident an additional 2 dollars a month once it is complete. Details of the plan, including a cost estimate, will come up over the next 90 days. The framework of the plan calls for 380 megawatts of power to be generated from solar panels installed on residents’ rooftops and through the SunShares Program, which would allow customers to purchase shares of a city solar power plant in exchange for credits on their energy bills. Another 500 megawatts of energy would come from utility-scale solar power projects that would feed into two transmission stations run by the city’s Department of Water and Power.

The third part of the plan calls for 400 megawatts to be generated from solar systems installed on the rooftops of city-owned property. The project, with a cost between 1.5 billion U.S. dollars to 3 billion dollars, is slated for completion in 2014. Currently only less than 1 percent of the city’s energy supplies come from solar, while coal and natural gas resources account for 76 percent of the energy produced by the utility. According to the mayor’s office, every 10 megawatts of solar power could potentially create 200 to 400 jobs.