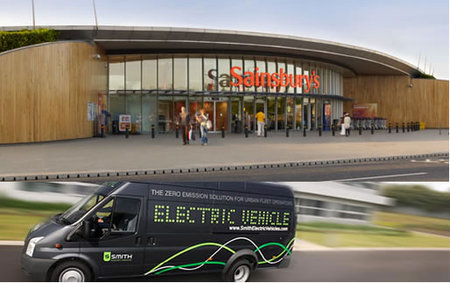 Sainsbury UK’s third largest supermarket chain has announced it is to purchase 50 Smith Edison electric vans for its online grocery delivery service. When added to the existing fleet of 20, the supermarket will have the largest fleet of electric vans in the world.The Smith Edison vans will be deployed in the London area, meaning 60 per cent of central Londoners will have their groceries delivered in one of these environmentally responsible vehicles. The 3.5 tonne Smith Edison vans will be based at ten of Sainsbury’s London stores and are due to hit the road from March. The vans have been modified to meet Sainsbury’s specific requirements for its urban online deliveries. Each vehicle is restricted to 40mph and can comfortably achieve the required range of 60 miles per day. The vans are also fitted with a fast charging system. The addition of the new vans will reduce London road transport emissions by around 155 tonnes of CO2 each year.

To ensure even greater efficiency, the Smith Edison vans use regenerative braking, meaning drivers can recapture the energy used whilst the vehicle is slowing down to help recharge the batteries. This is similar in principle to the KERS system used in some Formula One cars. This move follows the introduction of an electric recharge point network at Sainsbury’s stores in London earlier this month. The points are situated at ten stores around the city, allowing customers to charge their electric vehicles free of charge, while they shop.