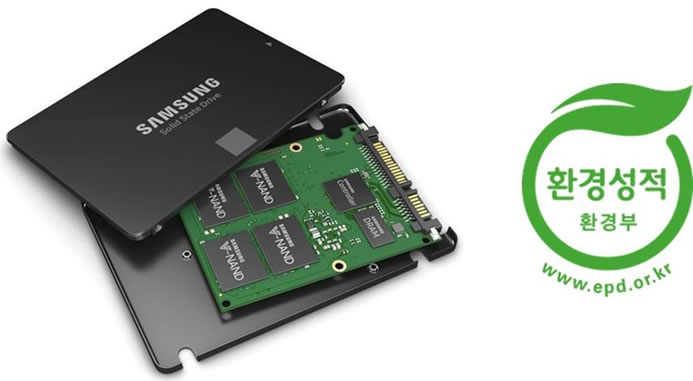 Samsung today announced that it has received the industry’s first Environmental Product Declaration (EPD) certificate for it’s 512Gb 64-layer 3bit V-NAND and 860 EVO 4TB SSD in Korea. The Environmental Product Declaration is a national certification system in Korea which recognizes a product’s performance according to seven key environmental metrics including carbon footprint, resource footprint, ozone depletion, acidification, eutrophication, photochemical smog, and water footprint. In terms of per capacity (gigabit), the carbon emission of the 512Gb 3-bit V-NAND has been reduced to less than half of that of the 10-nanometer (nm)-class 64Gb V-NAND that was certified last year.

An 8TB SSD composed with the 512Gb V-NAND can reduce approximately 240kg CO2 of carbon emission per year compared to a 8TB SSD product composed with the 64Gb NAND, producing the same effect as planting twenty-five 30-year-old trees.nanad Samsung earned its first low carbon footprint certification for the DDR3 DRAM server module in 2009 and had since expanded its environmental certification portfolio across its key products, including NAND flash, LPDDR, SSD, and application processors.